You Are Here: Home » Local News » Determined to fight for the future of the National Media Museum 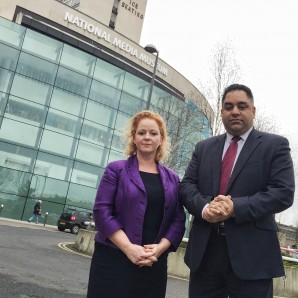 Judith was today joined by fellow Bradford MP, Imran Hussain in a full and frank meeting with the Director of the National Media Museum over recent highly controversial announcements.

Speaking after the meeting Judith said:

“Let’s be clear we all want a vibrant and successful National Media Museum, but I have huge concerns about the way in which the museum has conducted itself and the direction of travel.
“There has been a complete lack of transparency and consultation both with local MPs and the Bradford community at large.

“I remain extremely concerned that the recent announcements amount to the stealth closure of the National Media Museum as we know and love it.

“I was shocked to learn that the decision to transfer the world renowned Royal Photographic Society collection, the abandoning of the International Film Festival and the move to rename the museum were all made over two hundred miles away in London. Not a single person on the Board of Trustees have links to Bradford, or indeed the wider region.

“We cannot have decisions about our city and our region being made by the “great and the good” in London.

“I’m determined to fight for the future of the National Media Museum and preserve our rich heritage for future generations. Our museum must remain a national museum and a beacon for culture in the North”.

In the meeting, Judith made three clear demands:

Jo Quinton-Tulloch, Director of the National Media Museum has agreed to take these requests back to the Science Museum Group board and will be providing a written response in due course.

Judith will be meeting with Ian Blatchford the Director of the Science Museum Group at the end of the month, where she will be demanding further answers and assurances.